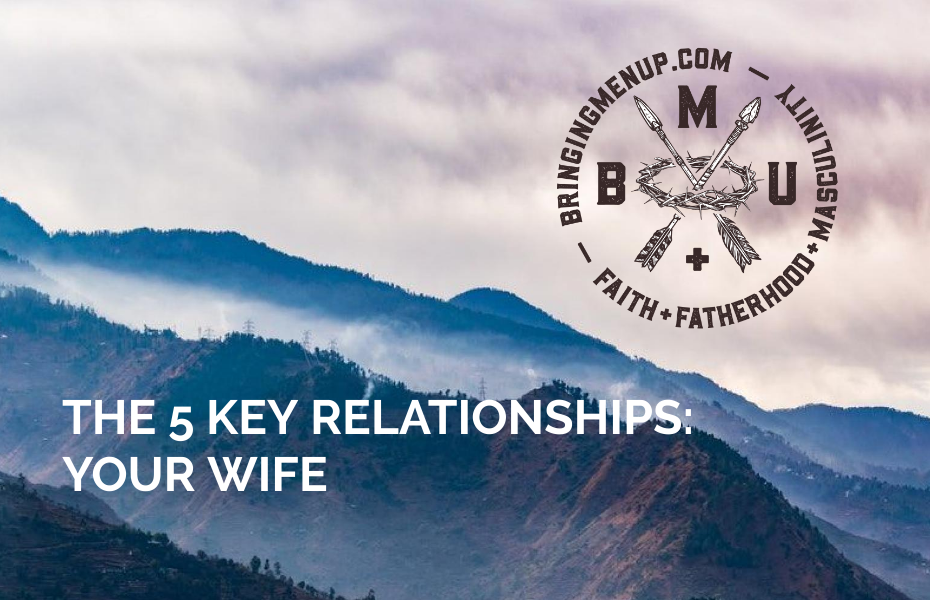 This is the third part of our series on the 5 Key Relationships (5KR).

“Husbands, love your wives, as Christ loved the church and gave himself up for her” (Ephesians 5:25, ESV).

Just in case you can’t detect a theme here, this relationship is the most important in your life AFTER you work on your relationship with God and yourself.

Of course, your relationship with your wife often seems like the most important, because it’s often the most urgent.

After all, you probably see and interact with your wife every single day!

If things are bad… they’re bad. And that can lead to you spending all your time and effort trying to fix it.

I heard a great quote today, but I’m not sure to whom it is attributed:

That’s probably a paraphrase, but it cleanly encapsulates much of the reason I write and work with men.

It’s easy to blame feminism for the state of women.

We can go back and look at the different waves and personalities and, blah, blah, blah, and try to place blame, but there’s somewhere else that we need to look.

At the men who tried to become their own God*.

[*I keep wanting to type “gods” here, but that really misses the crux of the issue. The problem is trying to become God in your own life. I do it, you do it, we all do it. It’s a huge part of our problem.]

When men seek to become God through some false identity, like work, or an avocation, or soemthing along those lines, that tends to take a lot of time away from what they were actually designed to do…

If the husband is not around, the wife often feels pressured to be the man because there is a void that needs to be filled.

And God didn’t create her to be the man.

So God created man in his own image, in the image of God he created him; male and female he created them.

There is beauty in embracing what God created man and woman to be.

But when a woman tries to be a man, she’s ultimately an inferior substitute.

And that sounds harsh, but it’s not. She’s trying to be something other than what she was created to be.

The thing about that is, it’s not her fault.

The root of the problem

While the woman may be an inferior substitute for a man, that’s nothing compared to the level of inferiority that exists when men try to become God!

When we, as men, abandon that which we were created to do, everyone suffers.

The Lord God took the man and put him in the garden of Eden to work it and keep it.

So we see that man was created for a specific task, to work and keep the garden of Eden.

Then the Lord God said, ‘it is not good that man should be alone; I will make him a helper fit for him.’

The man gave names to all the livestock and to the birds of the heavens and to every beast of the field. But for Adam there was not found a helper fit for him.

So the Lord God caused a deep sleep to fall upon the man, and while he slept took one of his ribs and closed up its place with flesh. And the rib that the Lord God had taken from the man he made intoa. woman and brought her to the man.

We see here the order of creation and the woman being created as a helper (which shouldn’t be taken in a negative or inferior way, simpy different).

Now, unless you’ve been sleeping in church for all these years, or haven’t picked up your Bible in a while, you know what happens next.

But what I find even more interesting is the words from God:

And to Adam he said,

“Because you have listened to the voice of your wife and have eaten of the tree of which I commanded you, ‘You shall not eat of it,’ cursed is the ground because of you; in pain you shall eat of it all the days of your life

I don’t know where Adam was when the whole apple thing happens (there are plenty of theories that you can research), but what I can see from this passage is that Adam had a responsibility that he shirked.

And God punished him for that.

Back to our overarching purpose…

But those roles are different…

And bad things happen when those roles get mixed up.

As the first created, I believe that part of the man’s role is to be the leader of the family.

But that’s where things also start to go off the rails.

(And why your relationship with God is so important)

There are so many examples of poor leadership in the world, from celebrities to CEOs to politicians, that we get messages on how to lead that are… mixed at best, and destructive at worst.

Many of us probably also saw this in our own family.

If your father was an absent leader, a weak leader, or an authoritarian leader, that likely has had a profound impact on you even if you don’t realize it.

And there’s a good chance that spills out into your own marriage.

If your default mode is to be a weak, passive leader, your wife is going to pick up your slack and take over that role (because women are strong that way, when they are forced to be).

This causes one of two things to happen:

No one wins in either one of these situations.

In the first situation, your wife resents having to make all the decisions in the relationship. She likely feels overburdened (though she would never admit it), but even more significant, she feels abandoned by you.

And she’ll lose respect for you. That’s when the sniping and nagging starts (and intimacy, of all kinds, slows or stops).

In the second situation your wife may go along for a while, but if you haven’t given her a reason to submit to your leadership (other than physical or emotional dominance), then she’ll eventually shut you out. Intimacy stops here too.

But doesn’t the Bible say a woman should submit?

But here’s the thing (and why we opened this 5KR with Ephesians 5:25)…

This submission is not one sided. Husbands have a responsibility too.

Both of these are Scriptural instructions, so if you aren’t fulfilling your part of the deal, you shouldn’t be upset if your wife is not fulfilling hers.

And that’s a recipe for an unhappy relationship.

My wife said recently that when a wife doesn’t see her husband as the head of the household, things don’t work well.

And that’s not because I’ve always been the model of Biblical headship… Far from it.

But this is something we all know intuitively.

So if your wife is not recognizing you as the head of the household, or she doesn’t respect you, or is a nag, or you just think she’s crazy and hard to get along with, don’t try to change her (and don’t pray that she would change)…

You need to start with yourself.

(Yet again, this is why we work on the relationships in the order that we do!)

Let’s look closer at Ephesians 5:25 and beyond

Husbands, love your wives, as Christ loved the church and gave himself up for her

This says a lot, but just in case we need to say it…

Jesus practiced what we like to call “servant leadership.”

I had entire courses on this in seminary!

Let’s look at a few more verses to really bring home what that means:

And he sat down and called the twelve. And he said to them, “If anyone would be first, he must be last of all and servant of all.

But not so with you. Rather, let the greatest among you become as the youngest, and the leader as one who serves.

When he had washed their feet and put on his outer garments and resumed his place, he said to them, “Do you understand what I have done to you? You call me Teacher and Lord, and you are right, for so I am. If I then, your Lord and Teacher, have washed your feet, you also ought to wash one another’s feet. For I have given you an example, that you also should do just as I have done to you. Truly, truly, I say to you, a servant is not greater than his master, nor is a messenger greater than the one who sent him. If you know these things, blessed are you if you do them.

We see from the life of Jesus that leadership is not about bossing people around, or having people (like your family) obey your every command, just because.

Servant leadership is about giving of yourself for others.

And one more thing for good measure:

Jesus sacrificed himself for us… even though we didn’t deserve it.

You are responsible for your relationship with your wife.

You have to lead well if you want to be followed. You have to take the risks associated with being a leader in your household if you want your wife to submit to your authority.

If you think your wife is crazy… She may be reflecting your shortcomings back to you. Examine yourself before you start thinking about ways she should change.

I recognize that there will be those of you out there with legitimate experiences of a woman who didn’t live up to her end of the bargain, despite your best and most sacrifical efforts.

I’d love to get your perspective as well, please leave a comment.

Thanks so much for reading, let me know your thoughts below!